In the beginning was the word,

And the word, in this beginning was B.O.R.E.D !

So what would yo

u do? I mean, if you had this chance to leave your world and all your pressures , compromises and responsibilities behind, to step out into the (sort of) uncontaminated wild, to live free and unfettered, unjudged and unbrushed in a dreamhouse paradise wonderland in the sacred bosom of the Andes.. and woke up to find that you were bored!

Would you admit it? That’s the first thing.

And if you did, would you buy it?  Or would you blame it on something… or somebody… else?

In my own case, obviously, I am shameless enough (which I totally blame on living in Ubud, Bali, too long) to confess it right here… I am BORED with the wild already.

But if I’ve learnt one thing from yoga (in fact, I think I learnt about 8 things, including that there are no wireless bras that can handle inversions in an E-cup) it is the ability, sometimes, to float above my situations and peruse them from a vantage point of calm, evidence-oriented witnessing, ignoring my own bitching and moaning.

Floating above myself in a scientific bubble of slightly turbulent yogic enquiry I saw that the ceilings in the Little Green House needed dusting. I saw too, the gruesome state of myself, suffering. A scruffy me, bloated on chocolate croissants and still in her pyjamas, was scowling about the kitchen, shuffling about the piranha-infested lawns in Scott’s socks, sprawled out in bed with 17 books on shamanism, unread, and Finding Nemo on repeat, looking the very definition of the opposite of bliss.

I dragged myself pas

t the Rasta veggie patch and the dreadlocked dog to ask my shamanic sister cactus rider goddess of the merlot grape and landlord about my situation. She lit up a cigarette and said, “Mmmm,” looking at me with a mystical sidewaysness.

I studied the runes, the Bhagavad Gita, the inside of flowers and considered whether this might be a necessary initial phase of breaking through the famous toxic residues, patterns and addictions from my grotesque unenlightened life in the world before being ready to get the bliss part. Like when you give up coffee and feel like you’ve got a brain tumour for a week.

I learned from friends with direct links to aliens that the past five weeks had been a crap time, anyhow, for doing anything much on Earth. They wrote that due to the realignment of the planetary grids and dissolution of third dimensional feedback loops in preparation for humanity’s ascension to the fifth dimension, all earthly ventures were set for instant obsoletion as the poles got set to docie doe and humanity united with the starbeings in a transcendental bliss that was free of bitey things. Actually, that was free of ‘things’ in general. Including chocolate croissants, which seems a shame. And will no doubt piss off the French.

I learnt that especially here, in Vilcabamba, which was an internationally known stargate, portal and alien speedway with convenient parking and excellent prospects for property speculators as well as pimps with pre-sales of fifth dimensiona 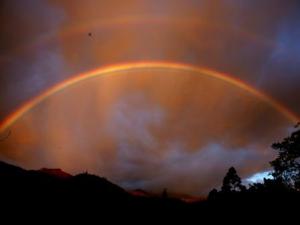 l non-space/time real estate, it was a non-time for action of any sort. Weird concoctions brewed up by evil American government chemists to moronise the public , combined with hanky-panky in the intergalactic pecking order and a slump in magnetism generally, were having a direct effect on the Magnificent Souls Gathered in Vilcabamba to ensure the survival of humanity. The Earth was about to hiccup, us light-workers were facing the pandemonium of a possible loss of hi-speed wireless (gasp), malicious dust attacks and 3 nights of darkness before the alines would arrive to serenade us through our evolutionary leap into puffs of happy smoke.

It was all over Facebook that Mercury was retrograde, running wild through veggie patches and flower beds everywhere. Experts on cosmicness agreed it was a Good Thing to be feeling bored, because life as we know it is out-of-date anyhow. The show is over. The illusions are about to vaporise, and the wild, for sure, is now to evolution what Milli Vanilli is to rock n’ roll.

I pondered all this and asked my bleak and woesome self, this me who was being an outright disgrace to the myth of the Good Life, if she had any excuses for her state of blissslessness of late.

She said she had four bloody good reasons for being pissed, which could be listed, in order, as:

The news of being pregnant at least explained how a nasty green shade of nausea had spilled over everything, including the heavenly wild and my one true love who was to been sulking about in it. It also explained why soy sauce had recently come to taste like the most vile and hideous, evil concoction known to mankind.

I don’t know if I am the first to admit this, or if I am just not cut out for it, but being pregnant is nothing like I have seen on TV. It does not live up to its advertising material, and is a very surprising event for a 42-year-old aunty diagnosed just recently as hopelessly infertile. Not to mention riddled with cancer and afflicted with irreversible immune system calamities – I have had more than my share of dubious prophecies from doctors.

Being pregnant was not causing me to glow and shimmer and sing along with the bluebirds of joy as rainbows hurled themselves in glee over the fertile plains of our dreamlife.

No. Bizarre things were coming over me. Being pregnant, it seemed, had caused me to hate Scott and every tiny little thing he did with a gruesome loathing. I was relieved to hear that a friend’s pregnant cat was having the same reaction to the sire of her litter just up the mountain, and figured it was one of those ‘girl-things’ we all pretend doesn’t happen.

What I had thought was just our profound incompatibility in the wild, turned out to be some kind of feminine auto-revulsion reflex mechanism possibly brought about by vast torrents of hormones frog-marching through my body which had very dark opinions about Scott, not to mention many of my other favourite things.

For example, I had become extremely particular about the folding up of tea towels.

According to new research, fetal cells, from their very first appearance mesh with the DNA, and possibly the personality, of the mother for life – so whose show was this really? What was going on? What was next?

Avocados were repulsive to both of me, as was coffee, packaged teas, wine, vegetarians and people with neat hair. We could not tolerate conversation about enlightenment, goddess energy, the Mayan calendar or out-of-body experiences. We were certain that carrot soup and pineapple were among few foods tolerable to eat, and began making urgent inquiries about how to ship Vegemite to Ecuador.

We began waking up feeling like we’d drunk three bottles of Wild Turkey, but with fiercesome cravings for Enya. And all of this, I could see from my floaty-yoga-place, I had suppressed and distorted into a neat little bundle of denial called I Hate Living in This Stupid House.

Which could be a taboo. Is that a taboo?

I wasn’t at all sure that being up the duff in a little green house with no actual job and no elasticated pants, while on an experimental adventure into whether living in the wild caused a devolution into ferality, or an evolution into grace and poetry, was a Very Good Idea at all. Especially considering the impending pole shift and everything. This town was literally crawling with aliens and cacao junkies.. was it a safe place to deliver a jar of Vegemite, let alone an out-of-date embodied human being?

The fetal cells were telling me plain and simple that it felt horrible to be pulled into a body, and that while they had some kind of important work to do for me, and were here for a reason, none of the treats and wonderments of life, not even life in A Little Green House were floating their little amniotic boat.

And I was asking them, from their point of view, was 42 a decent age to become a mother? Wouldn’t I be asked all the time if I was their grandmother, just like I am asked once a month if I am Scott’s mother?

And what about deforestation? And divorce? And immunisation and peanut allergies?

And who was really having all these doubts and fears and hostile reactions anyway? Were all these questions and anxieties mine? or were they the baby’s? Were they a darkness accumulated, inherited, beamed from another dimension or just a gooey side-effect of the alchemy inside?

Where was the Glow of Motherhood? The sage half-smile, the golden light, the coy radiance of the plump and fertilised? Was all that just a cover-up? Was that quiet maternal muse just a graceful expression of the secret women’s business of suppressing the storm of nausea that lurks on motherhood’s horizon?

I got the very clear impression that the spirit that was hovering about me, being summoned into the 2012 story by virtue of the body being made for it, was not entirely thrilled at the prospect. Was the baby swimming backwards and my body the site of a mighty existential battle like when Arjuna didn’t want to go into the battlefields of life, and Krishna said he had to? Was it the baby who didn’t want to be here? And are you allowed to think such things?

My shaman said, “They don’t call this The Valley of Fertility” for nothing,” and took a long drag on her cigarello. 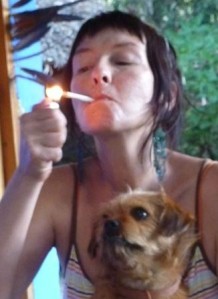 “They told me it was the Valley of Longevity,” I protested. She raised her eyebrows and blew smoke at a rainbow behind her.

There were lots of serious things to fret about, but mostly I just stayed in a bed of seasickness and food aversions, scowling at Scott over the covers and swelling up. I was so sick and disgusted with my predicament in the wild that it seemed to me this couldn’t be normal. I mean, seriously… is this normal?

The gynecologist in the synthetic city of Loja, the closest business hub from Vilcabamba, just 2 hours from the Little Green House by flip-flop and suicidal taxi ride, had chalk on his suit jacket. This seemed to bother him throughout my $25 appointment, but did not diminish his charm. He listened to my story and put me on the table to take a look at my world inside with his ultrasound machine. “Hmmm,” he hummed. “Mmm, hmmmm.”

“Yes…” he said. “It’s true. You have all the parts for a baby. Here you are having the sac, this is for about 12 weeks and five days, and here is the placenta, very good. Everything you have, and all it is growing to make the baby, but looking here and there and everywhere, there is no baby inside.

This baby it is growing, but it is not having any body.”

My shamanic world shaker shadow dancer landlord was there to translate. Her eyebrows did a quick fandango before she looked at me and said what we were both thinking, “You are having a fifth dimensional baby.”

This should be interesting.