It’s the perfect destination, in fact, for the connoisseur of health – offering everything from state-of-the-art medical facilities to gorgeous hot springs, wild rivers inhabited by holographic virgins, sacred springs, witches’ markets, yoga schools and shamanic healers – all under a canopy of beautiful architecture and heavenly skies.

The more I poke about in Cuenca, the more marvels I discover, and some I almost wish I hadn’t!

Tucked away in a corner of the magical city, along its riverside promenade, Calle Larga, is a private museum I promised not to mention by name. This little gem is packed with art, tools, skulls and textiles from Ecuador’s rich past, but its real prizes are not on display, says the curator, because of modern day head-hunters!

I visited with a friend who knew what was stashed in the museum’s hidden corridors, and as can happen here in Ecuador, it took just a little coaxing for him to have the staff arrange an on-the-spot private showing of their most dangerously precious collection.

The curator brought us one from her hiding place, tucked inside a lovely polished wood box, inlaid with velvet. She opened her suitcase-of-a-coffin in the lovely sunshine of a Wednesday morning and left us both agasp.

There are no words, really, for the site of a real-life shrunken head. It’s something utterly, err… jaw-dropping.

What lay before us was the incredibly well-preserved actual face of a real life person, shrunk to the size of a fist, with rosy cheeks, a flowing mane of luscious black hair and a stick poking out from its neck so it could be stood up for display.

A cross between a mummy, a wax statue and something you might buy to entertain a spoilt dog, the head caused the sort of cognitive dissonance you can actually feel in your brain.

The not-as-ancient-as-you-might-hope practice of severing, peeling and shrinking heads is a medical phenomenon which Ecuador’s warrior-surgeons perfected. It is also what saved one tribe, the infamous Shuar, from domination and obliteration by various conquistadors, including the most modern ones; missionaries and tourists.

Word of their head-shrinking habits protected them from snoops, gold hunters, God-botherers and even oil mining until very recently. Only the worst of the developed worlds’ ‘entrepreneurs’ would dare visit the Shuar – and those were mostly Westerners who sought to provoke and bribe Shuar murders to boost the supply in shrunken heads for their hugely profitable adventures on the curio market.
Today, genuine shrunken heads remain a prized delicacy on the collector’s black market. The museum curator says she has been offered more than US $100,000 cash each for her heads by unscrupulous-looking drop-ins, and that she is terrified of thieves.
Trade in the heads has been a fashion since colonisers were first ‘horrified’ by their existence. Back in the 1930’s shrunken heads were all the rage and fetched about $25. Today, online, you can buy a fake shrunken head for about $80 by mail-order at http://www.salangome.com but a real one is a prize that hunters will still kill for.

Early laws in Ecuador and Peru that severely punished trade in shrunken heads were specifically made to deter tourists from stimulating a trade in them, and encouraging murder to get them – and not to deter the Indians.

Which only makes them more valuable in certain circles, and adds to Ecuador’s challenges in protecting herself from bounty-hunters, because she boasts the finest shrunken heads in all the world.

Consummate artists in head shrinking, Ecuador’s indigenous Shuar Indians remain notorious and dreaded for their passion for death, revenge and war… which seems strange really, because over their uncountable years as custodians of the forest they hardly made a dent in it compared to what developers and lifestyle-changers have done to the area (let alone the planet) in less than a hundred.
Their culture is deeply rooted in spiritualism, magic and war. Without priests as mediums to God, Shuar society depends on intimacy with nature and powerful hallucinogens to make direct, personal contact with spirits. And, according to anthropologists, the Shuar perceive every death in their tribe as evidence of a direct spiritual or magical attack requiring vengeance. Failure to exact revenge by means of murdering the culprit – even for a death we would attribute to natural causes – invites fearsome retribution from fallen ancestors. For Shuar, the successful murder of an enemy should be swiftly followed by the shrinking of their head to seal in their spirit and end the cycle of revenge.

And so the hunt begins. Perpetrators are first pursued through the cosmic realms by means of ritual. One identified, they are killed in real life, decapitated, with careful section of skin from the chest and back. The skull is made into a make-shift basket by means of the killer’s woven headband, passed through the mouth and the neck, as he escapes to begin the shrinking.

Inspecting the handiwork on the head before me at the museum, I can see that this is a very well-practiced skill. The head, now the size of an orange, with clearly recogniseable features, is perfectly preserved down to its eyelashes, lovely plump lips and, dare I say it… exudes a healthy glow! 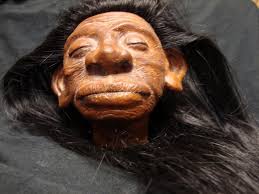 The head has been peeled off the skull (which was likely tossed into a river somewhere as a gift to the sacred pani, the anaconda) has had its eyes sewn shut with fine native fiber and its lips closed and skewered with little wooden pegs. It has been simmered for approximately an hour and a half with spices, then been turned inside out for scraping before popped right-side around, like a sock, and shrunk again by dropping hot stones through the neck and rolling them around to prevent scorching.

Hot sand and stones were later applied to the exterior of the face to seal and shape the features. Surplus hair was singed off and the finished product hung over a fire to harden and blacken. Which would all have taken about a week, culminating in a forest ceremony where warriors make a hole in the top of their shrunken head to fasten it onto a chord so that it can be worn around its new owner’s neck.

Which all sounds terribly barbarian.. until you look into it and discover that as recently as WWII American soldiers were into taking heads of Japanese as souvenirs and relics for sale. Life magazine published a picture in 1944 of a young American woman posing with an autographed skull sent to her by mail from her navy boyfriend, and US troops taking heads in Vietnam caused a terrible fuss – which makes you wonder, really…   who are the real barbarians!