A continuation of a one woman’s quest to make sense of various things  (and a small, fluffy dog’s endurance of it) ….

Well, it appears that most everything, still, hinges on secrets and lies.

… and lashings of confusion, red wine and procrastination… if that’s what you call it!

After boldly declaring that I would Press The Red Button and discover why my enlightenment was not only vital to all humanity, and frogs and small things everywhere  – but just a click away online, I have thus far failed to hear Craig Hamilton’s alluring message.

I have, however, received a flurry of emails from his auto-mail device, coaxing me to Get Enlightened Now, for under $500, and am thusly rapidly loosing confidence in him as a truly mystical force in my life  – are True Mystics really that good with Mailchimp?

In a message to any readers out there… I want to admit that my last post was not as uplifting as it would need to be to increase my popularity as a Blogger, lunch date or writing teacher.

I am fully aware of that. And, frankly, don’t care much  – which could be a result of my ongoing failure at enlightenment. And it could be some sort of hormonal imbalance. Either way. For now, I know that I am failing to engineer this blog into a platform for either fame or profit. Possibly later, when I have a rabbit and a veggie patch, and a proper tea pot, I will be in a better mood and re-invent it as a way to make you all feel jealous of my marvelous life, and pay me money and other stuff to be my friend and tell other people you knew me when…

Ah yes, there I was, so… after admitting I was feeling less than elated with the state-of-things lately, I was interested to receive a flurry of private mails from other souls equally shitty, but unwilling to hang out their knickers in public, in comments.

These people, like me, wrote that they were getting kindof desperate at the apparent failure of their own quests for happiness, despite diets heavy in kombucha, alfalfa and green smoothies. And despite decades, in some cases, of meditation, hypnotherapy, soul-searching, surrender, abandonment of white goods and vehicles, inheritance and previously illustrious lifestyles.

One wrote that she was nagged, like me, with a prowling sortof deepdown anger, a lumpy irritation that lurched about underneath her new life in the wilds of Ecuador, threatening to ruin the illusion that running away to nature is a cure for modern mood issues. She couldn’t put her finger on the problem – had blamed the moon, the tides, her boyfriend and the International Situation.

But after realisiing that her partner too, felt sortof cranky and clunky and ready to flip shit over, even though he is a role model for personal growth, community networking and Living in the Wild, they had decided to blame it on last night’s sushi – and see how the week unfolded.

They had also decided to Tell Nobody About It. Because admitting to moodiness, irritation, doubt, frustration or sadness risks both your popularity in Spiritual Communities, and your ability to make an income. It also tarnishes several of the central commandments of expat life, which focus heavily on everybody agreeing that we are Happier than those we left behind.

Here in Cuenca, after threatening myself with online seminars on How to Be Enlightened if I didn’t snap out of it, I dragged myself and the Princessa out of bed next morning to face another day of … what next?

I complained of bitchiness and tiredness and violent reactions to the endless bleat of car alarms, hooligans, traffic, rushing people in synthetic powersuits, passive-aggressive friendships and sirens here to my Ecuadorian host, and he looked at me with infinite compassion, saying, “There is the problem of the Neo-Liberalism.”

To which I said, “Are you enserio?”

He said, “Yes! This is the problem of the modern society – there is a brokenness of the true life. To be modern, the people have lost those things that make the life steady, and bring it to deep, and with the stability. This is family. This is knowing you are safe. Knowing that everything is always coming for you, that your roots are deep, deep, deep in the soil of your life and your people. You cannot have this, and what you call the freedom.”

Now don’t get the idea that this guy is wearing a poncho and a feather in his sombrero. No. This guy is some sort of computer engineer, an academic, social theorist, with a vivid and real-time interest in the political, economic, social and international possibilities of his country and continent – as well as in toasted sandwiches, hot chocolate with cheese and smoked pig.

He goes on, gently exploring my questions, my disappointments and my quest…. “The story that promises the people this thing they called the freedom – the travel, the adventure, the separation – this is the thing!,” he says. “The economy, and political ideas, they have been part of a story that has caused whole nations of people to leave their land, their home, their long story and the people in it for happiness, for money, for something. But this is what we are careful for in Ecuador. Our people have traveled for fortune all over the world, and then mostly, they come home. We ask: the true wealth? What is it? Is it all the possibilities? Or is it the trust, and the deep place you know when you are a part of a whole idea and a people and a story called your home?”

“There are things the people who call themselves ‘modern’ have lost that they cannot measure, because they are invisible things now  – like smoke. It is these things that make the gringos poor, maybe. They are poor because they have lost everything that makes us truly rich, and now they need to invent a new kind of home, a spiritual one, a life-style idea in their apartments, or a sortof shaman idea they can work on to make things seem good to them. Here, we don’t need these things. We don’t need a new home in our story because we know where we live, what it means to belong, even if the place and the people are not perfect – we can love this anyway, and accept it all, because there are things more deep and more real for the people – we love our land, and we love our people.”

We talked for a long while… and decided, apart from the horrible truth that I am quintessential victim right now of Neo-Liberal forces and all sorts of other illusions, I am in need of immediate and possibly brutal assistance: we needed to find a witch.

The fragility of my mood, according to Dani, is likely a combination of my various gringo-delusions, and accumulated doses of ill-will. He has no patience for the question of my failure to be enlightened as a possible issue in all of this, and whisks me off into the cold morning. 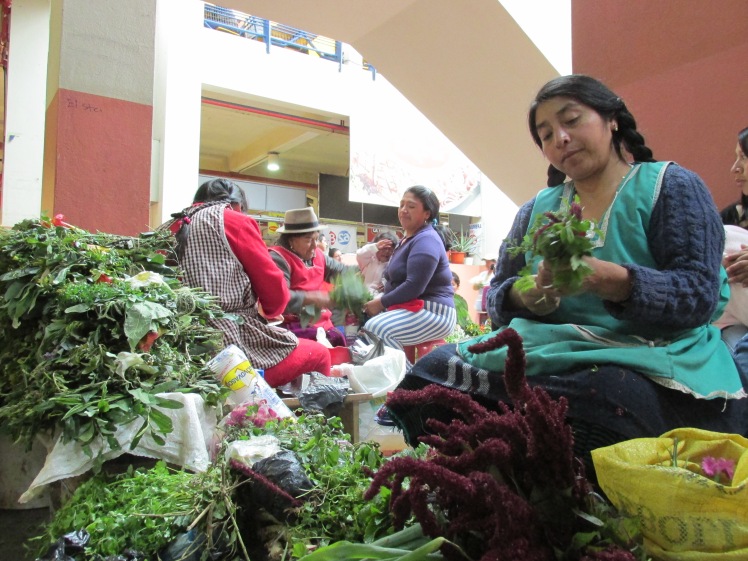 Cuenca’s witches can be found in several spots, on regular days, but the ones we set out for hang under the broken escalators at the central market, close to where we live. They are to be found sitting among baskets of cut flowers and herbs, surrounded by clusters of young mothers with babies. In line for their attentions are adolescent men and people in business suits. We wait in the frigid market for their turn to be whipped with flowers, spat at and diagnosed by one of a gaggle of tough chicks in braids.

The witches deal in herbs. They sell bouquets of leaves and blooms, posies and grasses in which they sit, surrounded by living cures for human ails, and laugh and eat fried trout as the Ecuadorians line up to be publicly lashed, rubbed with an egg and checked out for the chilling threat of the evil eye.

What is Evil Eye? Good question!

In any case, it’s worth a check-up, so Daniel and Princessa and me head for the market and prepare for the worst.

Picking your witch is a matter of availability and intuition. The one we liked first had a queue. In the end, we decided on one who seemed kindly and sweet and slightly less brutal with her whipping bushel. She was plump with authority and about four-foot tall, with the trace-marks of the Andean sun on her cheeks. There were four customers in line before she could treat all three of us. 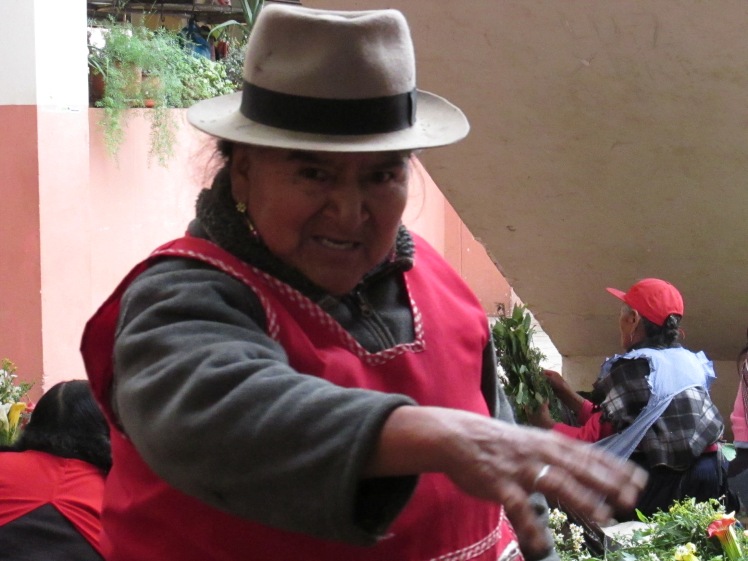 We had an hour or so, then to watch the whole show, sniff herbs and watch the market buzz with shoppers for chicken gizzards, slabs of fresh fish and colourful mountiains of tropical fruits.

The witches all use the same method: first is a rough whipping of the patient from top to bottom, back and front, with a large fragrant swatch of mixed leaves, flowers and herbs, while each healer whispers and sings to herself as the plants exhaled their scent, and the client flinches and smarts. A baby wriggled and screamed in our witches lap as we watched, there were writhing babies everywhere.

Tossing her bushel aside, the witch then passes an ordinary chicken egg over her patient’s body, rubbing the scalp, face, chest, belly and back before breaking the shell into a cut-down plastic bottle to read the diagnosis. 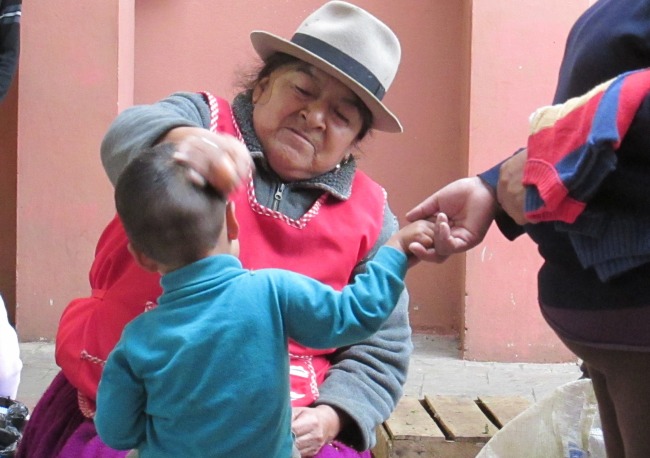 In my case: bad news! The witch tipped her bottle toward me to show me the cloudy albumen, and a weak, sickly yoke which is textbook chook for a bad case of Evil Eye. Princessa had it too!

In Ecuador, at the witches’ market anyway, there isn’t much hooha about a positive diagnosis. Nobody freaks out. There is no need to sign up for ongoing treatment, seminars or special diets. You are not accused of being unenlightened, egoic or contaminated by flouride, mercury or hostile aliens. You are simply warned to close your eyes as the witch takes a hefty swig of pure medical alcohol mixed with bits of plant and other mysteries, and blasts it into your face.

Blinded, and blasted into a world of overwhelming fumes and darkness, you are roughly spun about, your clothes lifted to expose skin on your neck, belly and back for further cold blasts with the booze, then dabbed with a black dot on your navel and forehead, and asked for $2. ($1.50 for the Princessa, which Dani scowled about, complaining of Gringo prices). 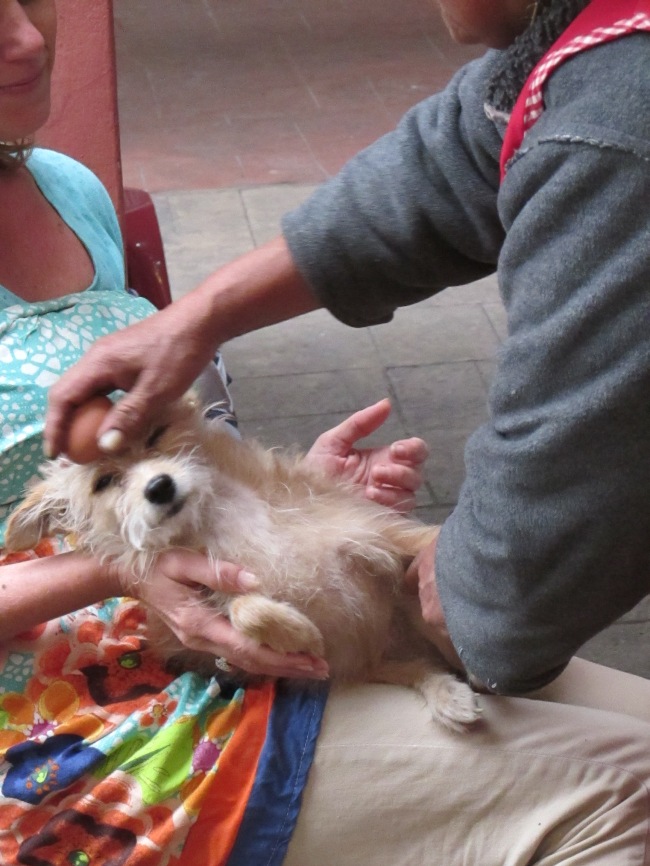 And so it was that I was cured of Evil Eye, and the Princess and me began to hope for the best.

6 thoughts on “Blame it on the Sushi”